Did you know that there are seven universal human emotions? Apparently there are six robot emotions. Who knew?

The seven universal human emotions are anger, contempt, disgust, fear, happiness, sadness and surprise. These emotions are communicated through spoken language, but they are also communicated through body language, facial expressions and gestures. And these non-verbal cues are recognizable to all people around the world regardless of age, gender, language or culture.

Well, that is not 100% tue. Many people living with autism find it difficult to read the emotional cues that people send. This can result in a diminished capacity for children with autism to properly express their feelings, communicate their wants and needs, feel empathy and / or relate socially. The communication barriers that autism creates makes it difficult for a child and adult to interact at school, work and home.

Early intervention with parental support at home is crucial to help children with autism understand the social cues of body language, gestures and facial expressions. Pediatric speech language pathologists and parents need to work together to help children with autism attach appropriate meaning to non-verbal communication cues. It’s not impossible to do, but it takes time and effort. The time and effort will be well worth it because it will improve an autistic child’s ability to communicate. It will also enhance experiences and interactions and lessen frustrations for an autistic child and those communicating with him or her.

In speech and language therapy, we currently use iPad apps, flash cards and books about emotions to teach and practice non-verbal gestures and expressions. We also use a mirror and ask children to mimic various facial expressions made by the pediatric speech language pathologist and observe their own expressions. At home, mom and dad should take turns mimicking facial expressions and gestures while attaching them to proper emotions. These tactics will help a child better understand how, when and why to use them.

It’s important to note, that faces can be deceiving, for example, tears of joy can confuse anyone. When you use the books, flashcards or iPad apps that only show faces make sure that you discuss situations. Tell stories with each face you show to explain why that face is sad, happy or confused etc.

Can robots teach emotions? I just heard they can 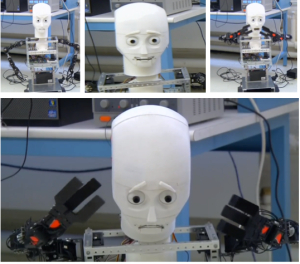 I recently stumbled upon a story about a robot named Caesar, who is programed to teach children with autism emotional cues. The robot is being developed and tested at the NYU Polytechnic School in Brooklyn, NY.

Caesar expresses six emotions. The developers of the robot believe that children with autism, who already relate more naturally to iPads and games than people, will relate to Caesar. So Caesar may be better at teaching the emotional cues than humans.

Time will tell, but I have a look of skepticism on my face right now.

View a video of Caesar in action here.

Non verbal Communication is just as important as verbal communication. If your child is not picking up or expressing emotional cues, team up with a qualified speech language pathologist to develop an action plan to improve these communication nuances.

One of the best thought leaders on this subject is Michelle Garcia Winner. She has a company called Social Thinking. She is an engaging speaker and she has developed so many great tools for parents and speech language pathologists to use. Check out her website called SocialThinking.

Here are some apps that you can use to help children with social skills. Clink on the image link below to buy the iPad app at the Apple Store.

Here are some books, flashcards and a game you can use to help children with social skills. Clink on the image link below to buy directly from Amazon. We especially like the Pirate Talk Game.

Full disclosure: Kidmunicate earns a small commission on any purchases made from the links above. These commissions do not raise the price you pay. That money is greatly appreciated. We used it to fund the development content and to maintain this website.

Pam Drennen MS CCC-SLP is the VP Director of Clinical Services Speech at Kidmunicate. Pam has a Bachelors and Masters degree in Speech Language Pathology from Loyola University in Baltimore, Maryland. Pam provides evaluation and treatment for a variety of speech/language and communication disorders. She has experience working with children with hearing loss, autism, Down Syndrome, a cleft palate, developmental delays, Apraxia of speech, auditory processing disorders, fluency disorders, oral motor/feeding issues as well as children with augmentative/alternative needs. Pam is a member of the American Speech and Language Hearing Association.
Toggle Sliding Bar Area
Page load link
Go to Top